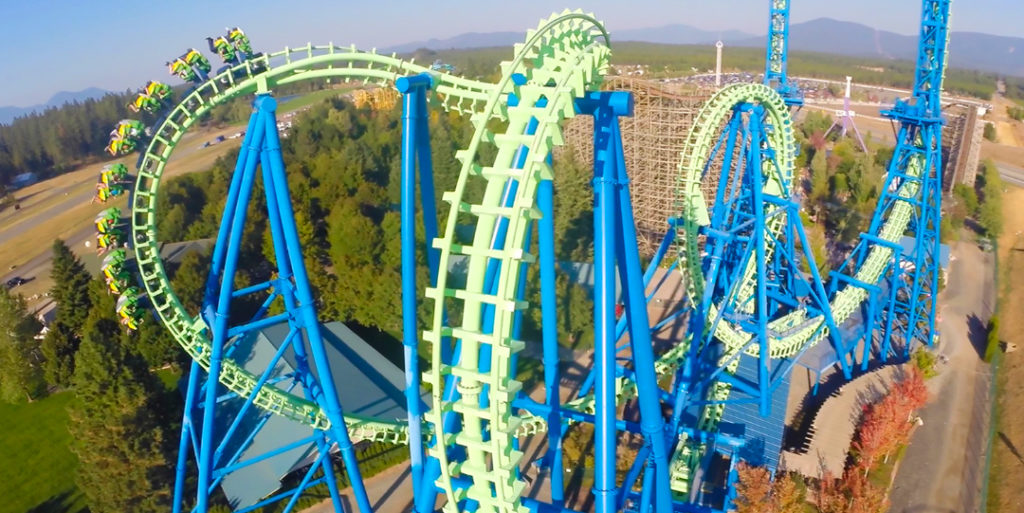 Where Is The Aftershock?

Silverwood Theme Park, ubiquitously known simply as “Silverwood,” is located not far outside Coeur d’Alene, Idaho, as a prominent travel destination in North Idaho. With a rich history as the Inland Northwest’s premier theme park, Silverwood is a must on your summer to-do list. And what better way to spend a day at Silverwood than landing a ride on the park’s fastest and largest coaster, Aftershock Silverwood?

What Is The Aftershock?

Assembled initially at the Six Flags Great America theme park in Chicago, Aftershock opened with its first moniker, “Déjà Vu,” in 2001. After a successful seven-year run in the park, it was disassembled and moved to its current home in Silverwood Theme Park. Following a naming competition, Aftershock opened to the public in 2008 and has become a park staple ever since.

While Silverwood is home to various roller coasters, ranging from classic wooden coasters to entirely steel-built, Aftershock stands out among the crowd. Standing over 190 feet tall, Aftershock clocks in as the tallest coaster in Silverwood and the tallest attraction. With a bright blue and green color palette, it’s hard to miss, being visible from every location in the park (and well outside of it too!)

Aftershock is described as a high-intensity ride, reaching speeds of over 65 miles per hour and a drop angle of 90 degrees. With a mind-boggling drop of 177 feet, this coaster is a thrill-seeker’s dream and easily the most hair-raising coaster in the park. But even if you aren’t into chasing an adrenaline rush, the design of Aftershock is something to marvel at too!

It’s not just the speed and height of Aftershock that are dramatic, but the layout is just as intense. With a backward crawl up the starting tower, riders eventually look down directly at the park below before being let loose at full speed back down. After a series of astonishing loops and sweeps around the coaster’s back end, riders now find themselves at the top of the second tower, facing directly into the sky, before falling backward through the entire coaster one more time.

Corkscrew is one of only two of it’s design ever made, and the design was retired nearly 50 years ago. Aftershock is a design known as a "giant inverted bommerang"produced by Vekoma, based out of the Netherlands, with a total of six production models ever built, and only four in operation today.

One of the world’s only Giant Inverted Boomerang coasters in operation, Aftershock is an engineering marvel and unbelievably fun to ride. Alongside the Corkscrew, another incredibly rare and unique coaster design, Aftershock is a must-ride for both coaster enthusiasts and theme park goers alike.

Finding Aftershock, as previously mentioned, is hardly a challenge. Its near-neon coloring and prolific height can be seen across the entire park and far beyond the property. Aftershock is located right at the end of the famous “Coaster Alley,” flanked on either side by its companion coasters ‘Timber Terror’ and ‘Tremors,’ both famous for their staggering wooden designs and thrilling fun.

Aftershock is also conveniently placed next to nearby food courts, family restroom facilities, and only a short walk away from the park’s less intense rides so you can take a quick break before jumping back into the action. Just make sure to keep a map on you or make a note of posted maps around you. After all, Silverwood is the largest theme park in the American Northwest, and you might end up lost in all the fantastic rides and activities!

While Silverwood is filled to the brim with gripping rides, relaxed attractions, and all the food you can eat, Aftershock stands out as the show star. Guests should remember to take their time getting there, as you won’t want to miss anything else this fantastic park has to offer!