Once described by Golf Digest as "America's Most Beautiful Resort Golf Course," this Idaho-based golf course has done nothing but live up to the status quo. If you've heard of Coeur d'Alene, you've either heard of Its beautiful lake, resort, or even Its world-famous floating green. Last Updated by Robert on November 24th, 2020
Reading Time: 2 minutes 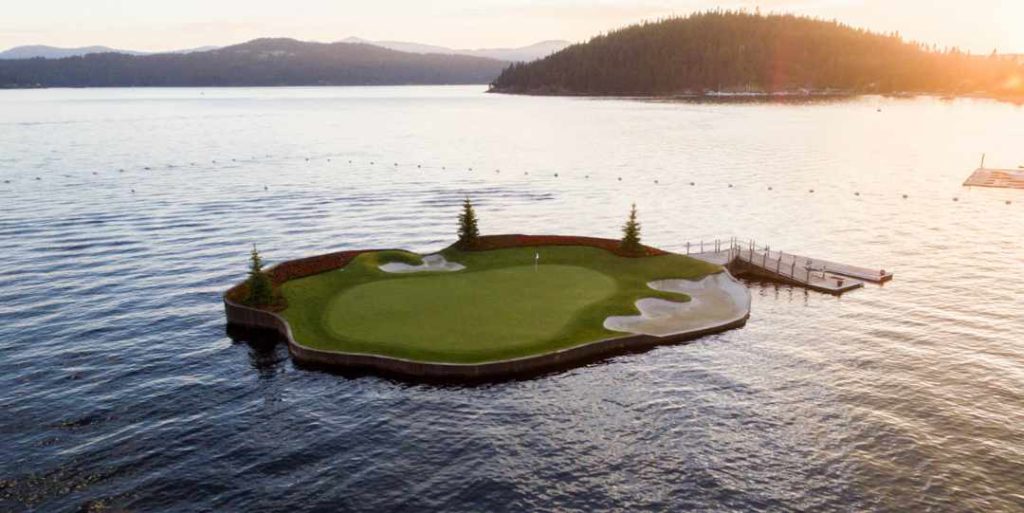 If you've heard of Coeur d'Alene, you've either heard of Its beautiful lake, resort, or even Its world-famous floating green. So what is it about this floating green that makes it so world-famous? Well, there's nothing quite like it found anywhere else! Golfers from across the world have traveled far distances just for their chance to shoot their shot at this specially engineered lake-bound shot.

Where is Coeur d'Alene?

Coeur d'Alene is a small Idahoan town with a rapidly growing population located in the northern part of the state. How far is Coeur d'Alene from Spokane? Our sister city Spokane, WA by is only a handful of miles and roughly a 30-40 minute drive away.

A Little About This Course:

Once described by Golf Digest as "America's Most Beautiful Resort Golf Course," this Idaho-based golf course has done nothing but live up to the status quo. According to the Coeur d'Alene Resort Golf Course website, It was 1991 when an esteemed Duane Hagadone had the vision for a golfing experience like no other. Since then, this 14 hole, par 71 golf course has delivered on its promises to be a golfing experience like no other.

What Was Here Before?

The property that we now know as The Coeur d'Alene Resort Golf Course was previously used as the old Rutledge Mill. A controversy at the time, and according to many locals, still an unwelcome addition, many could agree that Hagadone's vision to turn a 148-acre property covered in waste piles into a beautiful lakeside attraction only added to the value of the town.

What Is The Floating Green?

The world-famous floating green is the last hole of the course and is where golfers from around the world shoot their shot at making it across Lake Coeur d'Alene. This floating green was a result of a vision Duane Hagadone had when envisioning the future use of the old mill site and watching a tug boat go by. Golfers whose skill outweighs the odds are then escorted by boat to finish their round on the movable island. I'd highly encourage checking out this YouTube video provided by the Coeur d'Alene Resort with a neat backstory and insider's perspective on how the floating green stays afloat and is operated by course staff.

The Live Coeur d'Alene team strives to improve upon inaccuracies, and welcome you to reach out with your comments/questions and/or concerns using our feedback widget or contact form.
wpDiscuz